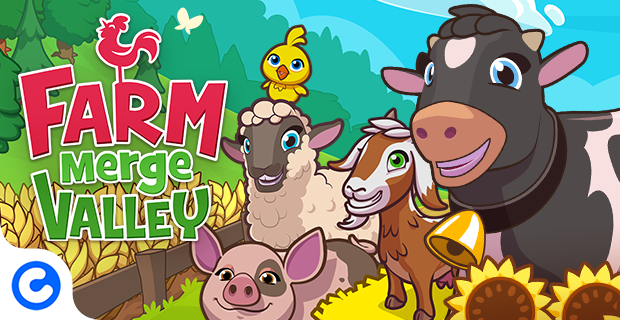 Farm Merge Valley is an agriculture-themed merge and building game enhanced for
strong social play. In the game, players manage their farmland including growing crops, harvesting, raising livestock, completing orders, and expanding their farming territory. The game gets bigger with every discovery made and players are able to receive train tickets to visit the farmlands of their friends and family. Players can assist their friends with tasks that will earn both them and their friends rewards in the game. Players are also encouraged to invite their friends directly to help clear land and other obstacles in their way.

“We are thrilled to partner with CoolGames to launch Farm Merge Valley on Facebook Gaming,” said Scott Koenigsberg, Zynga’s Chief Product Officer. “CoolGames understands how to create groundbreaking, high-quality HTML5 games with years of experience launching games on Facebook Gaming. Farm Merge Valley expands the possibility of HTML5 through its social and building hybrid model and we cannot wait for our global audience to engage with the game.”

“Merge is one of the fastest growing game genres in mobile and it has been a great experience to work on this directly with Zynga, who have been pioneers with many legendary titles in this space,” said Laurens Rutten, Founder and CEO of CoolGames. “We believe that there’s a vast untapped potential for deep and high-quality merge games on HTML5 game platforms too.”

Zynga is a global leader in interactive entertainment with a mission to connect the world through games and a wholly-owned subsidiary of Take-Two Interactive Software, Inc. With massive global reach in more than 175 countries and regions, the combined diverse portfolio of popular game franchises has been downloaded more than 6 billion times on mobile, including CSR Racing™, Dragon City, Empires & Puzzles™, FarmVille™, Golf Rival™, Hair Challenge™, Harry Potter: Puzzles & Spells™, High Heels!™, Merge Dragons!™, Merge Magic!™, Monster Legends, Toon Blast™, Top Eleven, Toy Blast™, Two Dots, Words With Friends™, and Zynga Poker™. Zynga is also an industry-leading next-generation platform with the ability to optimize programmatic advertising and yields at scale with Chartboost, a leading mobile advertising and monetization platform. Founded in 2007, Zynga is headquartered in California with locations in North America, Europe and Asia. For more information, visit www.zynga.com or follow Zynga on Twitter, Instagram, Facebook, or the Zynga blog.

Headquartered in New York City, Take-Two Interactive Software, Inc. is a leading developer, publisher, and marketer of interactive entertainment for consumers around the globe. The Company develops and publishes products principally through Rockstar Games, 2K, Private Division, and Zynga. Our products are currently designed for console gaming systems, PC, and Mobile including smartphones and tablets, and are delivered through physical retail, digital download, online platforms, and cloud streaming services. The Company’s common stock is publicly traded on NASDAQ under the symbol TTWO.

CoolGames is a pioneer in bringing high quality casual games to HTML5 channels in the post app-store era. The company has launched games for many new ‘Big Tech’ game platforms including Facebook Instant Games. Its catalog contains both fully in-house developed titles, as well as games based on famous IPs, including Battleship and Monopoly Sudoku.

The company was founded in 2010 to prove that mobile games don’t have to be limited to the app-stores alone. Using 100% HTML5-technology, CoolGames has been publishing hundreds of games since. The company’s headquarters and in-house studio are based in Amsterdam, The Netherlands, with a satellite office in Tokyo. For more information about CoolGames, please visit corporate.coolgames.com.